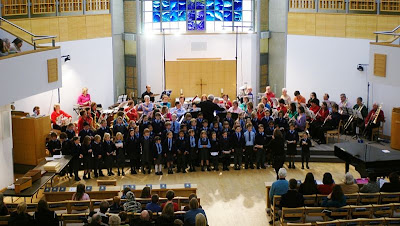 Two firsts for the band yesterday - a concert in the Falkland Islands Memorial Chapel just outside Pangbourne, and given in conjunction with Englefield Primary School.

The Memorial Chapel is a building within the grounds of Pangbourne College. It presents only a small face to the outside, but when you go in you realise it is like entering a ship from the bow, because the building opens up to something quite large inside.

The chapel makes a graceful ship, and with its excellent accoustics, a perfect concert venue.

The concert began with the School Choir who sang several songs including Chitty Chitty Bang Bang, Those Magnificent Men in their Flying Machines, and The Hippopotamus - with the audience joining in the muddy bits!

Then the large and varied School Band performed Oh When the Saints, Coming Round the Mountain, and Jingle Bells.

After a short interval - and when the saxophones had found their parts - we took the stage for the second half. Pirates of the Caribbean made a resounding start, Jungle Book a pleasant contrast, while Baa Baa Black Sheep, with our conductor Robert Roscoe’s help, became an education. We even sang to the audience in Mazama - was that another first? Fortunately for the audience, the expert singers took over again when we accompanied the School Choir in Over the Rainbow and a song from Oliver!.