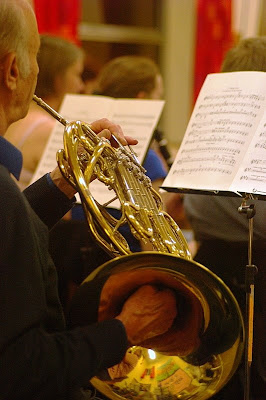 Carl Orff’s Carmina Burana is a piece I’ve long had a love-hate relationship with. As a boy I rehearsed parts of it for a performance in London. Great music, but my voice broke before the big day, and since my school was only providing a boys’ choir, that was me out. Later I got a CD recording, but found it usually gave me a headache.

So the band arrangement by John Krance has been something of a revelation. Carmina sounds so good, so natural, just as if Orff had originally written it for wind band. And it doesn’t give me headaches, for all its verve, intensity, power, and drama!

Carmina really ‘rocks’, as they say, and anyone coming along to Beenham Band's Anniversary Concert on 20th June is in for a real treat. (Tickets from Newbury Corn Exchange).

I did a little hunting around and found that Naxos has a recording of the Krance version of Carmina Burana, available from their website for £5.99, including postage. You can listen to samples of each track on their web site.

Carmina is part of Naxos' Wind Band Classics range, several of which are currently half-price: any votes for new repertoire?
Posted by Tim on 3.6.09