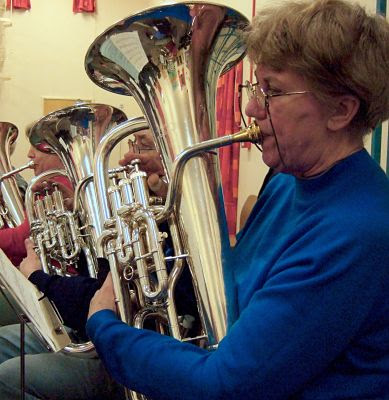 I see from the Reading Chronicle that Ann Zebedee, who used to play euphonium with Beenham Band, is making a bid for a political career.

Beenham now falls within the Wokingham constituency, and Ann is standing as Wokingham's UKIP candidate in the general election.

The 67-year-old mother-of-three, who lives in Reading, said she is incensed at the ineptitude, mismanagement and behaviour of the existing Members of Parliament and believes she has what it takes to make a change.

It is the first time Miss Zebedee, who is a keen musician and is associated with the Waltham St Lawrence Silver Band, has been put forward for the position of MP, but she is relishing the challenge.

She said: “I have always been politically minded – my father was a councillor in Bethnal Green for 34 years and I have always been interested and would spend many an hour as a youngster talking to him about politics.

“But this is all new to me and I have never done public speaking before, but I will just try to be pro-active.

“If I see something needs doing I will try to action for it to be done. But I think something needs to be done to improve the image of the politicians of today and without trying to sound big-headed I think I could actually do something.”