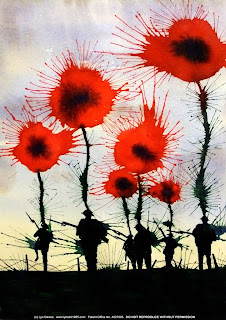 As we approach the Centenary of the end of the First World War, we invite you to our remembrance concert -
Poppies and Peace.

The programme includes 'Mars' and 'Venus' from Holst's 'Planet Suite', 'Dartmoor 1912' from John William's score for the film 'War Horse', 'In Wartime' by David Del Tredici' and 'Benedictus' from the 'Armed Man' by Karl Jenkins.

Please read the story below about the striking image we have used on our publicity material. We are grateful to the artist,
Lyn Davies, for granting us permission to use the image and share the story.

Poppies
In the summer of 1968, I was thirteen and my family went on holiday to Jersey.
We stayed with my grandparents in St Helier.
All the adults warned me not to ask Grandad about the Great War.
They said that he wouldn’t tell me anything and would probably go into one of his ‘moods’.
The first time we were alone together, I asked him and, after a long silence, he told me.
For about an hour, I listened to Grandad’s memories of  The Somme.
The steady tick of a big, dark grandfather clock marked frequent pauses, when he stopped to gather his thoughts.
He said his pals became expert at judging how far soldiers had been from the explosion that killed them.
The outer ring lay as if peacefully sleeping.
As you came closer to the epicentre, the butchery became increasingly horrific.
They all knew this was a good place to find replacement boots: if you had the stomach to
shake out the feet of the previous owner.
He told me that some explosions reduced men to a fine red mist, which was carried high
in the updraft.
Some of his mates said poppies would grow where the mist settled.
I thought I had forgotten about Grandad.
I thought I had forgotten that summer afternoon.
Forty five years later, I painted ‘Poppies’.
Lyn Davies
01.07.18.
Email: lynsart1955@gmail.com
Web: www.lynsart1955.com
Posted by Fiona on 12.10.18